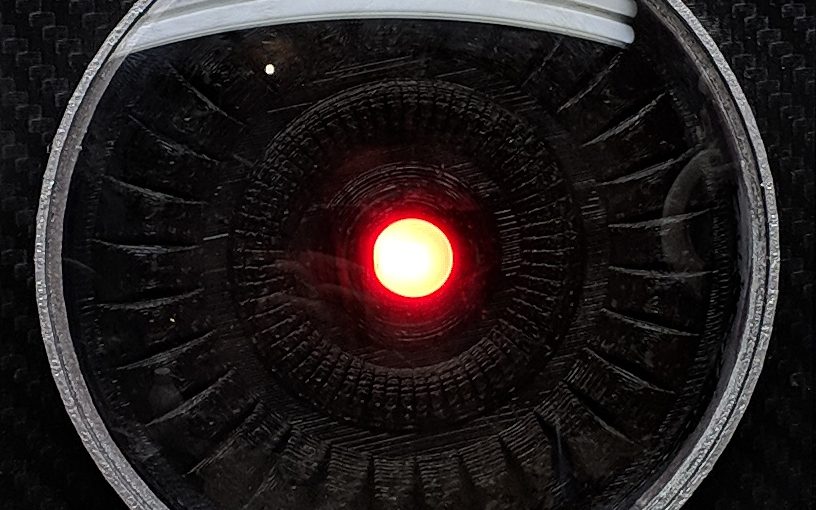 There have been a few replicas produced over the years, like this one that ThinkGeek is no longer selling, and all the amazing builds in this epic thread on the Replica Prop Forum. This is the HAL 9000 prop replica I put together and now have looking over my shoulder while I work- because what self-respecting, science fiction loving, gadget building nerd wouldn’t love to have their very own pet killer robot to watch them.

I started with the HAL 9000 model posted by Concentrix . Then grabbed a thicker frame  and Speaker Grill.

All the HAL models I looked at were setup to use either the original Nikkor fisheye lense (there’s no way I’m dropping  $1000 for one of those!) or a cut up plastic ornament globe (weak sauce). I had an old overhead projector lens I wanted to use, so I modeled a new Lens Ring and Iris in Solidworks. My lens sits a little more proud of the face than the original design, but looks well balanced. I designed / patterned the iris to look a bit more like an eyeball than a flat camera lens. I also set mine up for a 10mm LED instead of the standard tiny ones for more of that murderous-computer-on-a-killer-space-rampage feel.

I printed the front panels a few times and had nothing but trouble, so I merged the pieces together and printed as one. Then I covered the front face with Carbon Fiber patterned adhesive vinyl. Not exactly true to film, but I think it looks very cool. The outer frame is wrapped (somewhat poorly) with aluminum tape from the hardware store. The lens ring and speaker grill are printed and spray painted chrome silver. The label at the top is inkjet printed on adhesive back paper. I’m still undecided as to whether I want to tear it apart and rebuild cleaner, or if I can just live with the imperfections. I’ll probably go with the latter…

The LED is run by an Arduino Pro Mini and a couple button cell batteries. Batteries seem to last about a day if I forget to turn HAL off. For now, the LED just fades in and out in a cyclical pulse, but I think I’m going to change the fade cycle to be a little more random. I think it’ll look a bit better, maybe like HAL is thinking up new ways to kill all humans 🙂

Eventually the plan is to work one of those smart home assistants into this – how cool would it be to have this murderbot in charge of my home automation gear? “HAL, open the garage bay doors please. HAL? HAAAAAALLLLLL!” Not sure that I want to shove an Amazon Echo or Google Home into it, but there are some Raspberry Pi based assistants that might be slick.

In an unrelated side note- this weird black monolith randomly showed up in my yard, it measures about 1:4:9 and is really screwing up my compass…