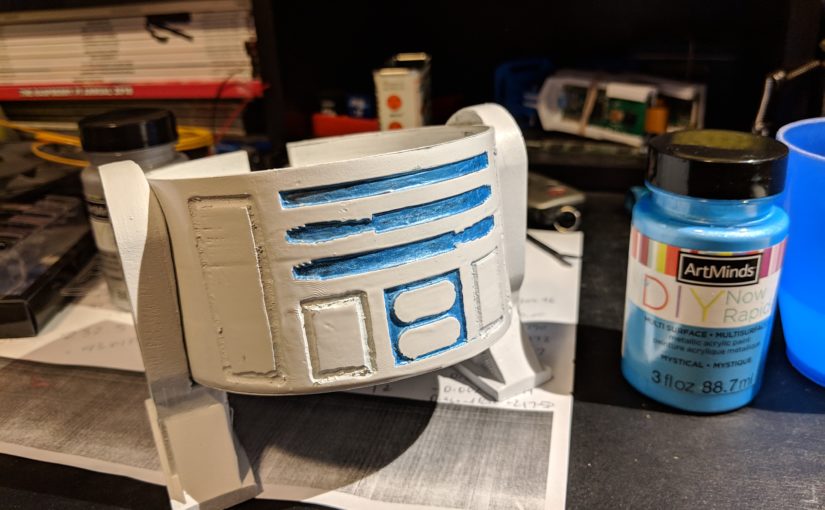 Ok, so not a particularly original title (or build…), but still neat.

Also: disclaimer- I am not an artist (or at least not the good kind). If I ever tried to be artistic, professionally, I would fail spectacularly. Or innocuously… I don’t know. But I’m not an art guy. Good thing I’m alternately clever 😀

This started out as a quick: “where the heck do I put this Google Home Mini Smart Home Assistant Time Saving Device Thingie?” My office is full of miscellaneous nonsense, partially completed (occasionally harebrained) projects, a monolithic treadmill (that doesn’t get anywhere near as much use as it thought it would), and a combination bookshelf slash Lego display. After much pondering and shuffling of piles, the little Google box ended up on the bookshelf with Shartmander and a bunch of Lego. But everything on that shelf is neat, and a plain old Google Home puck thing is boring. So I searched the interweb for a clever holder and found R2! The shape of the GHM lends itself perfectly to the design. And as an added bonus- now it blends right in with my other nerdy junk 🙂

I might eventually paint the cloth top to look more like R2D2’s chrome dome, or maybe just stick some colored crap to it for a less permanent solution, but I think we’re good for now. Especially considering the fine detail painting skills I’m working with.

OK, so to start with- Lulzbot makes nice sturdy printers, but they’re not so good with fine detail. Or I might have been in a hurry when I set up the print… that seems plausible. Anyhow, the print come out pretty well, a little rougher than I would have liked and a bit warped (thanks HVAC blower right above the printer), but good enough. Commence Primering! Two coats of Primer, followed by heavy sanding, followed by more primer, then more  sanding… and repeat ad nauseum. Suffice to say, much primer, and much sanding went into this. Next time I’ll save time by not rushing the automated machine that builds up the base for the thing I’m trying to make.

Oh, also I busted the fitment tab off the leg while test fitting. Good thing I’ve got plenty of Super Glue!

What I don’t have is the right kind of paint, the right kind of paintbrush, or enough practice to paint this well. Oh well, I opted to just go for it and see how things end up. The blue paint is Acrylic Paint, so it stuck to the glossy white spray paint base coat just fine, but it’s thick, wouldn’t flatten out, and has a dull matte finish. Precisely nothing like the shiny chrome blue I wanted it to be. The paint brush was from one of those cheap Ikea sets in the kid section. Why did I think this was a good idea? I’m sure these brushes are great for water color or poster board… not so good for poor little R2’s detail painting.

But I muddled through, and the results don’t look completely terrible… In the right shadows… at a distance… when seen with your peripheral vision…

I’m actually decently happy with it (for now). I’ll definitely still come back to it with some better paint and a decent brush once I’ve gotten more practice in, but it’s good enough for now 🙂

One thought on “Aren’t these the droids we’re looking for?”