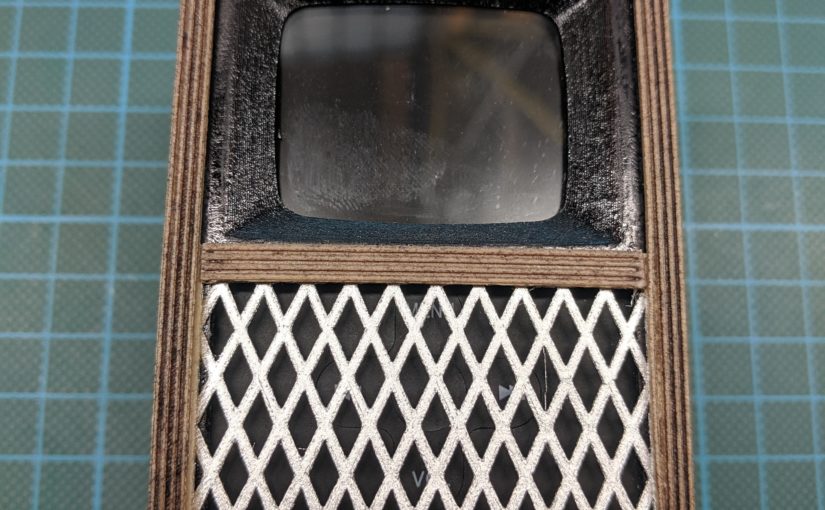 Ran across this slick little TV on thingiverse and had to make one.

I 3D Printed the TV body and trim pieces in some cheap woodfill PLA and  stained with a Red Mahogany Minwax stain pen. Inside is a completely terrible little media player (this has got to be the worst one amazon sells, but it was $10. It works well enough for this, but I strongly recommend not buying it if you actually want a usable media player), a tiny 5 volt audio amplifier (also from amazon, something like $8 for a 10 pack, so expect some more loud noise making cleverness in the future) , and a little radio shack speaker I’ve had in my misc parts bin for at least the last 15 years. I didn’t think to get pictures of the inner bits (I know, right? What the heck was I thinking), but I cracked open the media player case, carved a chunk out of the back housing with a Dremel, soldered one end of the amplifier to power and headphone connections and the other end to the little speaker. And of course I super glued the TV case together, so I’m not opening it up unless the nephews manage to break it again :). Speaker cloth is some weed barrier cloth leftover from the last time I redid the yard. The TV housing is modeled for two speakers (stereo sound off a terrible media player in a tiny box with zero separation? Nope.), but this setup is good with one. Media player only supports some weird proprietary-ish video format (am4? I think it was am4, but not entirely sure), so I had to dig around the interweb to find an application that could manage it. I transcoded a bunch of Twilight Zone and Outer Limits episodes (the 1960’s version of course!) and loaded them up. Viewing angle is pretty tight, the video quality is terrible, and I don’t know why the video doesn’t want to fill the screen… but the sound is nice and loud. And it’s pretty nifty to have a little self contained TV playing old Science Fiction shows. Overall, it makes for an awesome little nostalgia box.

Yeah, I know the top left trim part is screwed up. I reprinted it a few times, but wood PLA is not the easiest to work with. This was the best result… I might reprint at some point and replace. If I do, I’ll take some pictures of the inner bits and update.